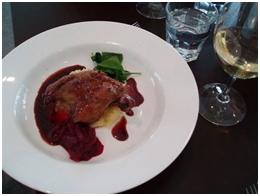 Black truffles are a personal favorite for millions across the globe. In every other household, there are chefs trying to incorporate this remarkable ingredient into every other recipe and for good reason. It lends any dish a unique richness rendering it as one befitting royalties.

This duck recipe is a timeless classic from France and is a chef d’oeuvre that shows the succulent taste of the meat at its best. Being an irresistible and impressive entrée, it is one of those very few recipes where taste meets beauty. When served with potatoes, it promises guests something that will sensationalize their senses.

Take potatoes and cut them into quarters after peeling off their skin. Put them in a pot with cold water such that it is 2 inches above the potatoes. Allow potatoes to simmer in the cold water for about 15-20 minutes and once they are tender, drain all the water in a sieve. Put the potatoes back in the saucepan and steam them over medium flame. Keep shaking the pan so as to get rid of any excess liquid. Now use a ricer and force potatoes through it in a bowl. Add sour cream to it. Beat them together after adding pepper and salt to your preferences.

Now peel the skin from the bird’s legs and slice them into strips of about ¼ inches long. Take a small pan and cook the skin in a tablespoon of butter over low heat. Stir it continuously until the skin is crisp and use a spoon to transfer the cracklings to a kitchen towel so that the oil is drained.

Remove meat from the bird’s legs and chop it finely. Put the garlic to all the fat that remains in the pan and cook it over moderate heat. Stir occasionally until it softens. Now put the meat in the pan and cook it while stirring continuously. Add pepper and salt to taste. Now add the meat mixture to the mixture of potatoes and allow it to cool. The filling can be made a day before serving. Keep the filling chilled and covered.

Place a wrap on a floured surface. Put a tablespoon of filling in the center with a parsley leaf on top. After brushing the sides of the wrapper with a few drops of water, place a second wrapper on top so that air is forced out. Remove the excess dough and craft more ravioli similarly. Take a kettle with salted water and bring it to a boil. Cook ravioli for two minutes. When they are tender and raise to the surface, place them on kitchen towels to drain. In the meanwhile, add the butter in a skillet and when it gets brown, remove it from the flame and drizzle in truffle paste and oil.

Arrange four to five ravioli on a plate with truffle sauce. Garnish the servings with parsley leaves and cracklings.